1972 – While being ill and staying in bed I read in the HÖRZU magazine and found a small notice about foreign broadcasting stations on shortwave that could be heard in Germany. I became interested and wondered wether they could be heard with a portable radio or not.

When being back to school I reported my physics teacher about these first attempts. He was a radio enthusiast as I knew. So Rudi, DL3TY(sk)  gave me some advice how to optimize my receiving situation with an old AEG BC-receiver and wire-antennas. Finally I ended up with a TRIO 9R59DE, a W3DZZ and a rotary dipole for 20, 15 and 10 m listening to radio amateurs.

1975 – I became licensed as DB5AQ and started with first activities on 144 MHz. Rudi had a nice second QTH on a mountain near by. Up there on the Ravensberg near Bad Sachsa in FL33b (JO51GO) I came in touch with DX on VHF. There was a group of hams around Rudi, DL3TY(sk) that worked hard in improving the QTH. Wolfgang, DK5AI, Henning, DK5AJ, his mother Herta, DC2AI(sk), another Rudi, DB5AT and myself spent a lot of time there. At least we got our club call sign DK0SF and worked in many contests. 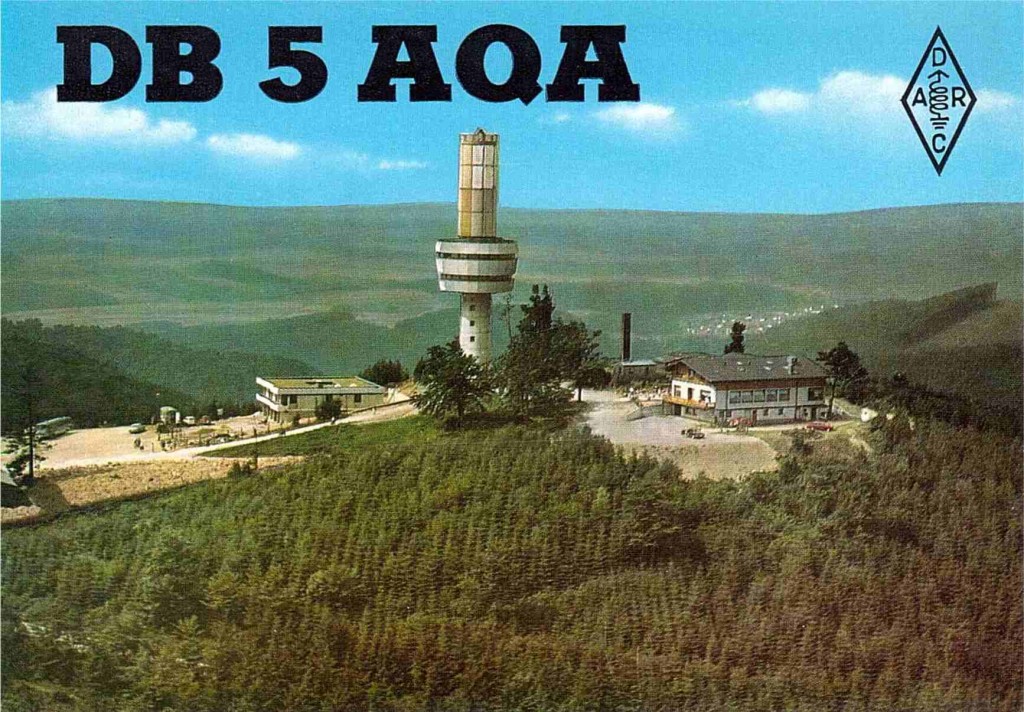 After working the first tropo DX on 2 m, I wanted to do more. So I tried out meteor scatter which was a new experience. But there was a challenge much more trilling than MS. So I collected any information about EME I could get. After starting my studies in Hildesheim I came in contact with the professor for informatics. I asked him about implementing some software for moon tracking on the local computer system. Finally he agreed and gave me some assistance in typing in the code and running some programs I found in the EIMAC notes.

1981 – Now it was time to start building an antenna system in the garden of my parents home. I constructed a tower of aluminium to set up 4 times F9FT 16 element yagies. Heinz, DK1PZ helped me in installing the hf equipment and because of my too “small” license, he was the one to run the first QSOs. I upgraded my license in 1985 and got my present call sign DJ5AR. My first initial on 2m EME was W5UN on November 2nd 1985. Until I stopped with EME in 1988 I worked 26 initials at all.

1987 – After moving to Mainz there was less time to be active on EME from my old QTH. So I started with some tropo and meteor scatter on 144 MHz from the new location in JN49CV with a single yagi. After a short time I became QRV on 1296 and 2320 MHz too. Since there were severe problems on 2m with TVI and some inconsiderate local radio amateurs chatting in the beacon band, the emphasis of my activity went more and more to the microwave bands. A 1.2 m dish and 120 W on 1296 MHz did a good job.

1992 – Time to say good bye to ham radio, when I founded my own engineering office. There was no more time left to be active on the bands.

2011 – For the summer holidays we planned a 4 weeks stay in our house in Ireland with all children and grandchildren. So we decided to go by car via France. That was an opportunity to take some equipment with me to perform some activity as EI8HH . So I got a new FT897D with antennas for 2 m and 6 m and took it all to Ireland. There were some exiting Es openings on 6 m to Europe wich I enjoyed very much. Best DX were double hop QSOs to TA and EA8. So I decided to become QRV again at home in Mainz too. First of all I had a survey over all the stuff stored in the cellar and installed some of the old antennas on the roof. The rest of the year I spent in watching activities on the VHF, UHF and SHF bands, exploring the capabilities PCs and the Internet brought to ham radio and making plans for my comeback.