I have been very short in time for this activity evening, but managed to work 10 Stations within one hour. The first three were the three Johns from UK: G4BAO, G3XDY and G4ZTR. 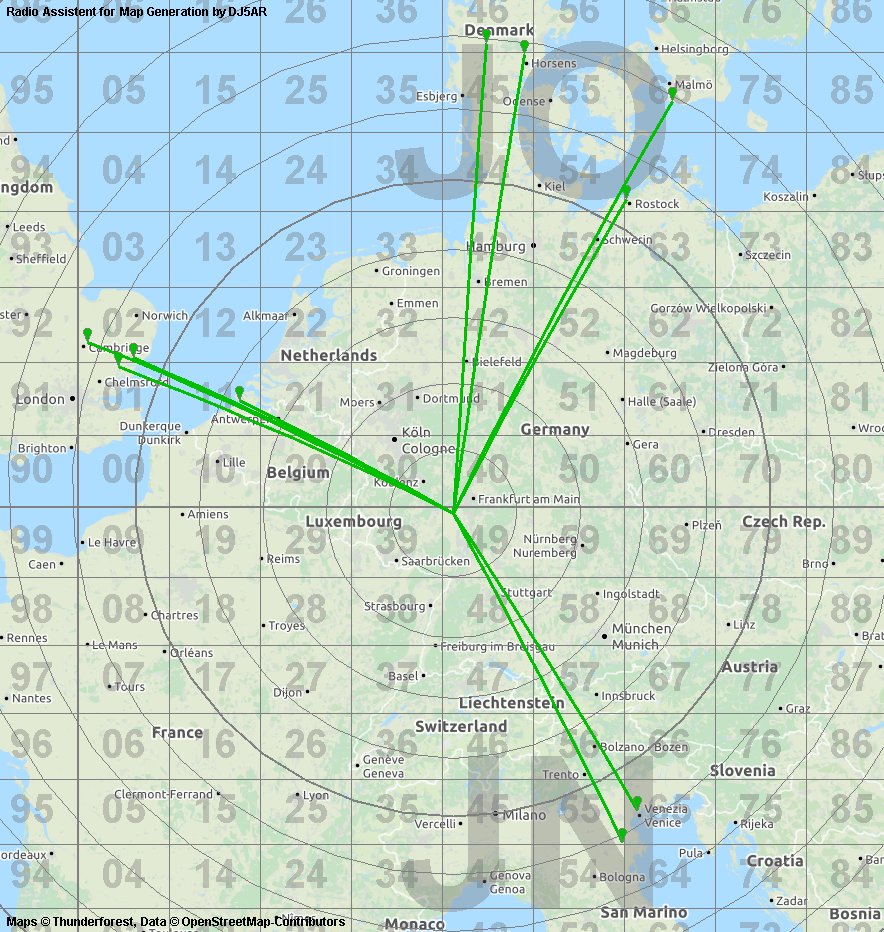 The activity was very moderate this time.

Last night I have been active in the Nordic and Italian Activity Contests on 13 cm. The conditions were awesome. Just four QSOs with IK2OFO (JN45), IZ4BEH (JN54, new #), DL0VV (JO64) and OZ3ZW (JO54) were written to the log, very weak Signals and rare airplane reflections most of the time. So it needed much patience and certain aircrafts to complete the QSOs as the audio record of my QSO with Roberto, IZ4BEH, shows.

It demonstrates my style of operation in aircraft scatter QSOs. I keep the transmissions short and listen in between. Only relevant information will be sent, because the duration of a reflection is typically very short. Fixed periods in aircraft scatter tests are not required at all. The first signals, received from Roberto, included the callsigns and fractions of a report. So I could be sure, that both calls were exchanged and only the report was needed. The locator was sent too, because IZ4BEH has been working in the Italian Activity Contest. It took quite a while, until a second airplane passed by near the midpoint of the path, giving us the chance to complete the QSO.

After my recent complainment about the challenge of the chat in March Contest, I got emails from Claus, OZ1FDH, and Kjeld, OZ1FF, with information about KST2ME, a tool to manage the ON4KST chat. I made use of it in the activity contests and it is a real improvement compared to the pure webclient. Thank you, Claus and Kjeld, for the feedback! KST2ME can be downloaded from Bo´s, OZ2M, homepage.

There was a lot of activity all over Europe tonight. I had 21 QSOs in 4 hours, which is not bad on 23 cm. The AirScout tool of DL2ALF helped much to manage QSOs via aircraft scatter.

The Nordic Activity Contest is always a very good opportunity to work . . . Italians!

Tonight everything was upside down. After loosing John, G3XDY in QSB – a fact that is very, very strange – I wanted to turn the dish via south to north, when Sergio, I1KFH was meeping me. We tried and had our QSO in SSB. What else to say? Giorgio, IK3GHY followed as well as Robert, IZ4BEH and Frank, IK3HHG and Walter, IW2BNA and finally Roberto, IK2OFO.

The NAC is always an opportunity to work stations from Scandinavia on 23 cm. Yesterday I had QSOs  with Frank, IK3HHG and Giorgio, IK3GHY in JO65 over 570 km. The signals were quite poor compared to QSOs before but were accompanied by strange pings – lighting scatter as Henning, DF9IC explained me tonight. So I wondered how the conditions would be this evening and turned my dish to the north. I started with DL0VV (JO64AD / 538 km). After a while I heard OZ9KY (JO45VX / 683 km) calling CQ and could add a new square to my collection. He was followed by SK7MW (JO65MJ / 691 km) with another new square and new country for me. In the meantime more and more stations from the UK logged in at the KST chat. Now the dish was turned to 298°. John, G3XDY (JO02OB / 547 km) could be detected on .215 and after a meep in the chat he turned his antenna to me. John produced a big signal in ssb peaking here 57 with little QSB. It was the second new country for me tonight and square #50 at all on 23 cm.