After a lot of tests and improvements have been done in tracking the doppler shifted signals, Jan, PA3FXB any I had another try around 1296.300 MHz this morning. Both of us performed compensation of the own doppler component as well in receiving as in transmitting. We agreed in using  the EME QSO protocol and periods of 30 seconds.

Jan appeared within my filter bandwidth as soon as the ISS became visible to both of us. His signal strength was peaking up to nearly 20 dB above noise and was easy to copy. The tracked frequency seemed to be stable until the ISS culminated. Then the variation of the doppler shift became so rapid that the compensation mechanism was not fast enough anymore. But that happened to the very last part of our QSO while we were transmitting our final 73s. So I can state that the best signal quality can be expected during the ascending and the descending parts of the pass.

In the meantime I received Jan´s recording. Listen how DJ5AR sounds on his side:

Many thanks to Jan for his cooperation and his patience in numerous tests before.

This success is dedicated to our fathers, who suffer from the same disease!

If you are interested in a try, do not hesitate to contact Jan or me. You can find us in the HB9Q 1296 MHz EME logger or in the ON4KST microwave chat, when QRV. 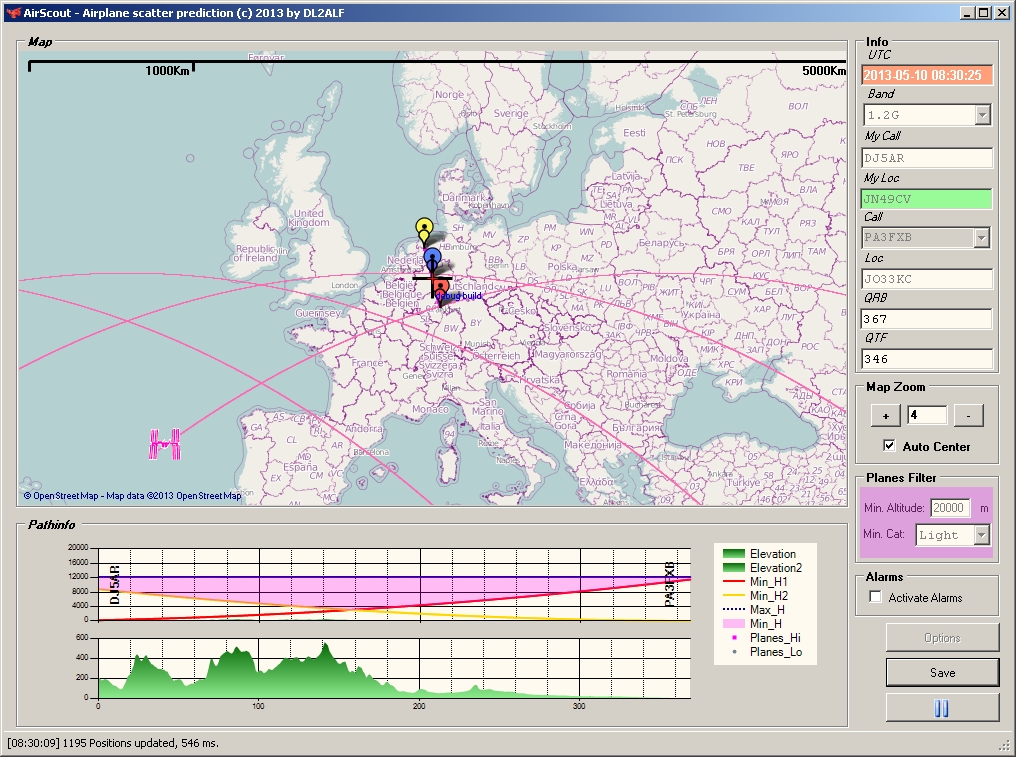 The first pass of three was disappointing because no reflections could be detected. In the second one I found Jan shortly after his window opened. But it sounded more like a strange kind of music than CW, Jan stated after listening to the audio file, I recorded of his signal. The reason were too long steps in timing for the frequency correction. I reduced it for the last try from 100 ms to 10 ms. After some recalibration of frequency and rotor control I started the system again when the ISS rose.

I could hear Jan without any manual corrections immediately after he started transmissions. The frequency tracking worked quite smoothly and reading his CW was possible without any problems.

PA3FXB as received by DJ5AR with QRG tracking every 10 ms

The audio file contains Jan´s signal in three periods. From 0:00 to 1:00 the signal raises while being on the upper flat part of the doppler curve shown above. During the second period from 1:00 to 2:00 the signal passes the steep part and even an adjustment every 10 ms leads to a kind of jumping signal. When receiving the third period, the signal was quite stable again and faded out, while the ISS moved to the eastern horizon.

In between his TX periods Jan tried to catch my signal without doppler compensation, just playing with the RIT. He successfully got a short part of my transmission:

Doppler compensation on my TX part did not work. It seems that the SDR does not accept CAT commands for frequency change while transmitting. So we will work on another strategy, where TX frequencies remain fixed and both stations will do full doppler compensation only while receiving.

Another test tonight with the experience of the one two days ago, was more efficient in finding the reflections. The ISS passed south of our QTHs. So I could track the whole pass from rise to set. Jan´s signal could be detected most of the time during his window. The picture shows his signal shortly after the rise of the ISS. Caused by the doppler effect it moves from right to left. The shift in this detail varied between 47 kHz and 38 kHz, while PA3FXB was transmitting on 1296.300 MHz in CW.  By a length of about 25 seconds there was a variation of 400 to 500 Hz per second. 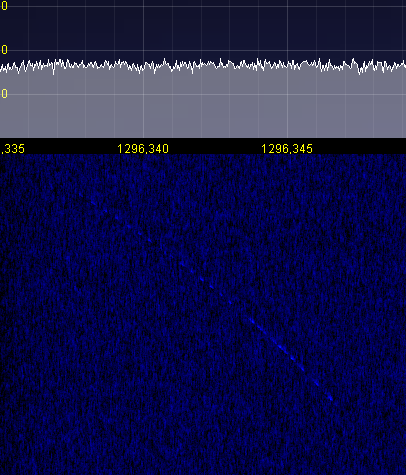 There have been earlier attempts to realize QSOs by reflections on the ISS. SM2CEW reports about nearly completing QSOs on 144 MHz with SM7WSJ in 2007 and he tried also with SV3AAF (more). DF2ZC claims the first ever QSO via ISS scatter on 2 m with DH7FB on December 9, 2007. They completed three more QSOs in 2008. It seems that these were the only four QSOs via ISS bounce since then. VA7MM reports about tests on ISS bounce with VE7BBG on 23 cm in 2004. PE1ITR tried with DK3WN in 2007. 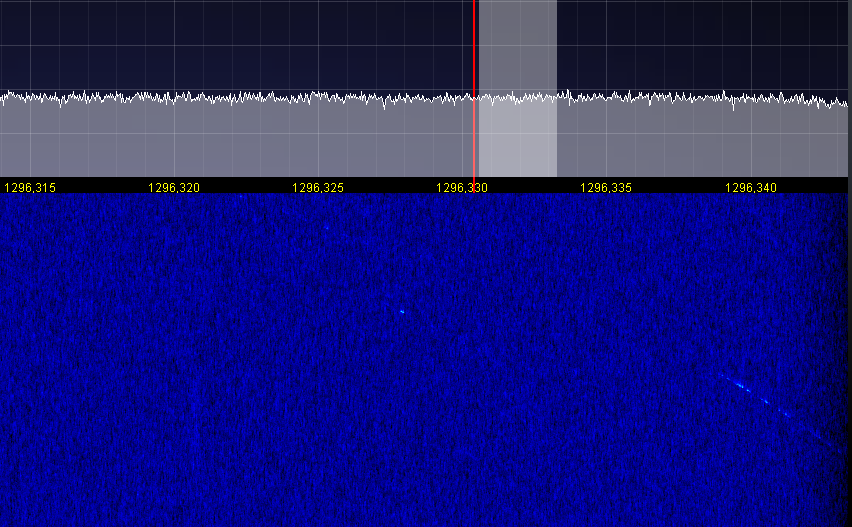 In the evening I had the dish pointing to the moon to perform some echo tests. After finishig that, there was some office work to do. The pc was still tracking the moon and showing the spectrum around 1296.030 in a waterfall diagram. After a while I noticed a strong signal at  .050 keyed in F2. It lasted just for a few seconds before it disappeared. I watched the display and could see it every now and then with various signal strength. Very soon I identified it as HB9BBD. This beacon is always very strong here – as long as the dish is turned in the right direction (175°), but at present it was pointing to the moon with an azimuth of 130° and an elevation of 10°. While thinking about that, I was looking at the moon outside the window, hearing the signal coming up in QSB and seeing a plane passing the moon.

Since Frankfurt airport is not too far from my QTH in Mainz, planes are passing by in a wide variety of altitudes. Using planefinder.com I was was able to find a correlation between reflections and planes flying in certain heigths, distances and directions. May be it will be possible to use aircrafts not only for forward scatter. If anyone is interested to try aircraft side scatter, please contact me. It could be helpful, when obstructions like noise sources, buildings or mountains are blocking the direct path.

Tonight I had a sked with Howard, G4CCH. He was there on the tick. We met in the HB9Q chat to arrange the details. What shall I say: Within a few minutes he became my first initial on 23 cm EME! As he told me later in the chat, I have been his #365 on CW (wow). After the completion of our QSO Nando, I1NDP called me to be the #2 in my just created initial list.

I am very happy now. Tnx Howard and Nando!

The DUBUS Contest was another opportunity to have a look at the moon. In the meantime I installed the preamplifier at the dish and the reading of PowerSDR showed me approx. 10 dB of sunnoise. I was surprised by seeing the tracks of not less than twenty stations in the waterfall diagram. After getting used to the special sound I could read the complete calls of OK2DL, SV1BTR, HB9SV, G4CCH, F2TU in CW. 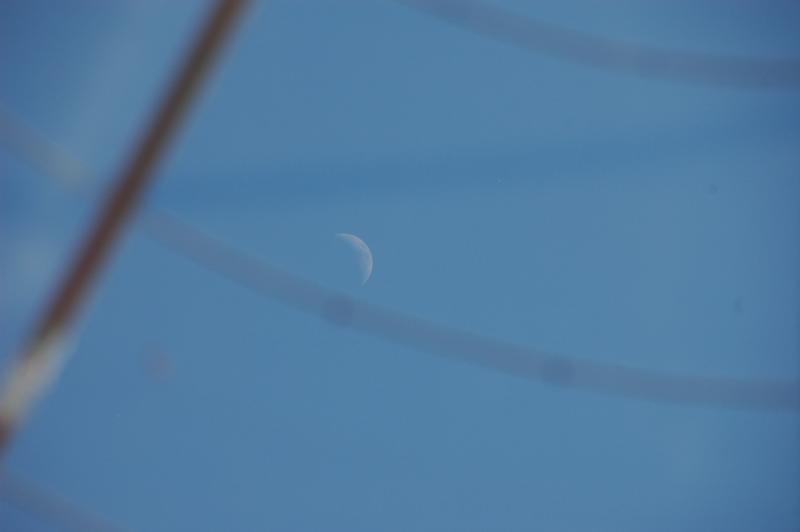 Yesterday, as a matter of course, I had to direct the antenna to the moon after installing the software for controlling the rotator by my computer. I was lucky to hear the first signals off the moon: LX1DB was active and could be heard with 419 in CW. Today I tried again and heard HB9Q with S3 in JT65. Later DJ9YW was heard also with S2.